So after a lovely sunny day yesterday, I awoke early doors to this 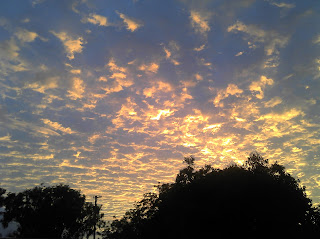 Lovely nice, hot, and just cleaned showers at Home Hill! Many thanks to the cleaning dude that had only just finished then waved me over (it must have been obvious that that's what I was after).

Headed towards Jappoon, I passed through Ayr (yes even spelled the same way as the Scottish town and thanks to my foggy camera even looks as miserable!). 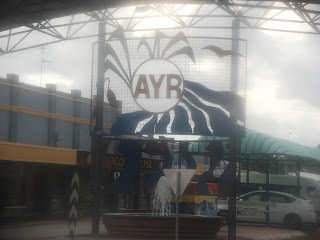 Managed to get a bit lost from the ONE ROAD that I had to stick to but surely it's not an adventure unless you take a wrong turn every now and then...right?? 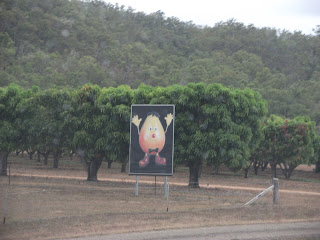 then of course I managed to find, and get a photo, of one of these 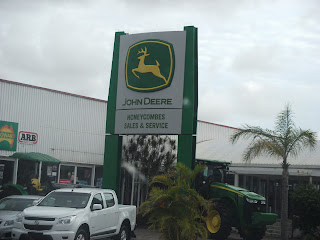 Everyone loves a good tractor!!

However, I think my favourite of this drive was the sign for 'Christmas Creek' which someone had so lovingly wrapped tinsel around!! 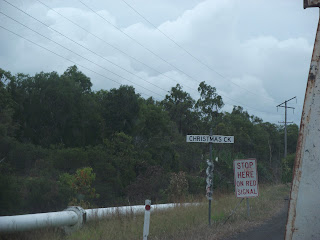 The overall drive wasn't so bad as there was a visible improvement in the amount of trees and general greenery about the place. I made it to Innesfail, grabbed some lunch and decided to call into Paronella Park to book my spot for tomorrow night (more about that place in the next post!)

Finally rocked up to my rest stop for the evening which was only maybe 15/20 mins drive from Paronella and expected it to be just me...NOPE! There was some kind of family gathering going on as there were at least 5,6,7 cars, a bunch of adults and an army of kids running about the place and playing in the creek. Thankfully it started raining not long after I got there so they all disappeared!

Wow! I was up before the birds this morning! I have never known a busier petrol station! It's like the gathering place for EVERYONE!!

However I did wake up to this... 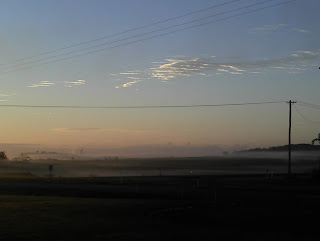 ...so not all bad really

Headed to Home Hill rest stop today. Not a long drive which was good after yesterday.Still not much to see but at least there was a few trees going about! 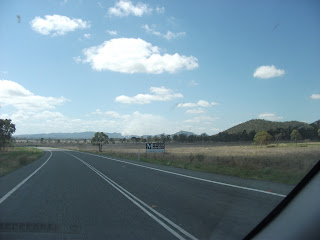 Got to Home Hill just after lunch time and settled in for the afternoon. Spent it reading all the brochures and leaflets I got the day before, sitting on my 'borrowed' chair, enjoying a little sunshine.

Ok perhaps I got a little bored as the afternoon dragged on and decided to photo the trucks that stopped during the day, this one was my favourite... 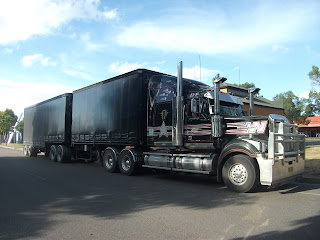 So I woke early, got myself sorted and headed across the way for breakfast with Gregg and Val.
Their camper was full of nifty gadgets but I must say my favourite was the drivers seats which swiveled all the way round! Simple I know but reminded me of the camper from Meet The Fockers 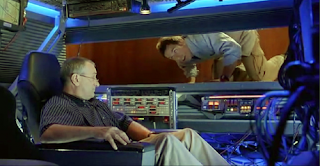 Tried Vegemite for the first time too! Can't say it went down so well though. It was a bit like Bovril with a slight beer taste to it which was fine but the aftertaste was icky. Sorry guys, I guess it's just not for me!

After breakfast I caught up with Lindsay and  Penny from the previous night and they helped me plan the next stage of my route and gave me a few more hints and tips. The agreed plan was to head to Emerald then head up through Clermont towards Mackay. After saying my goodbyes and thank yous and picking up my newly acquired plastic garden chair I headed on the next part of my journey.

OK so there is absolutely NOTHING to see along the A4 or the A7! My view for the majority of the 4/5/6 hours drive... 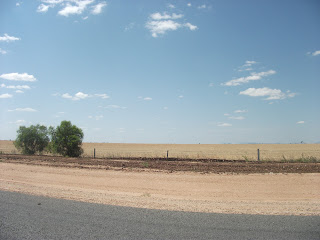 The majority of traffic were these guys, one of which was so friendly he decided to kick up a bunch of stones and chip whizz bangs windscreen! 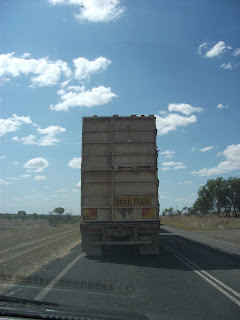 The most interesting thing I saw from Duaringa to Mackay was a train crossing which took forever as they can have up to 100 carts following them! 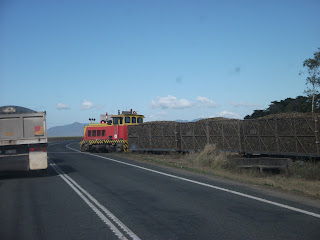 Oh! HUGE THANKS to Gregg for the heads up on a free, yes FREE, apple pie in Emerald! He had ordered it a few days earlier but forgot to collect it...so I went and asked to see if it was still in the fridge and this is what I got 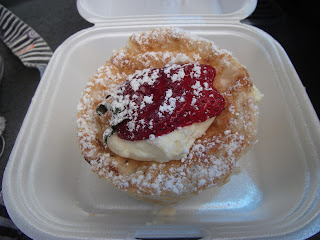 It was so good that within a matter of minutes it was reduced to this... 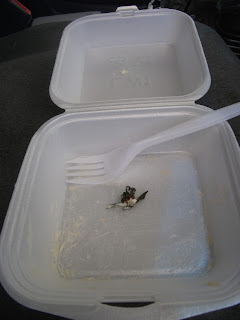 This part of my journey was possibly the most boring and time consuming. It may have felt longer because it was so boring however. Also, since the campers engine had a glorious habit of heating up rather quickly and way beyond what all the warning signs recommended, I ended up having the heating on to take the heat away from the engine. All I can say is "I was absolutely ROASTIN'!"...not an attractive state to be in at all.

Eventually arrived in Mackay and it was already dark. I wasn't sure how much further the rest site was so ended up staying at the BP servo just outside of Mackay. There were toilets, free showers, food and fuel so I was quite happy!

After worrying about where I had panic parked the night before I woke early to a guy taking his dog for a walk. As long as it wasn't someone telling me to move on I could deal with that. Although once I opened the front curtain to see where I had in fact stopped I was pleasantly surprised! 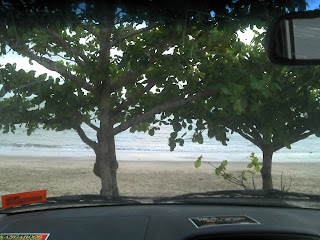 After taking advantage of the facilities by the beach I made my way to Duaringa, heading inland towards Emerald.
I arrived around lunchtime and headed to the tourist info on the other side of the camp site. The woman there  was nice enough but I couldn't tell if she was part of the museum or actually the official elected tourist information person! She palmed me off with a bunch of leaflets whilst saying that there wasn't anything to do there...great information stop that was! 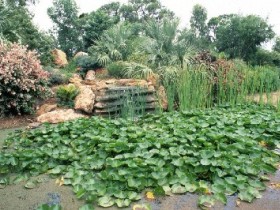 Anyway I pulled up the camper under some trees and started writing everything down that I had done so far and tidied the camper as best I could. Whilst tidying, I realised that I had left the charger for my Aussie phone...wonderful! I knew it was going far too well for a Gemma adventure!

As the day wore on I got talking to the couple that were parked to the side of me, Lindsay and Penny. They were so friendly and after about 5 minutes it felt like we had known each other for ages!
Gregg and Val were in the other camper opposite and they came over and joined in the conversation. They were some of the friendliest people too! Somehow there appeared a glass of wine in my hand with cheese and crackers on the go! We sat talking for ages about where we had been, where we were going, what was worth visiting, what wasn't etc.
Gregg told me about some of the places they had visited including Paronella Park which looked amazing from their photos. Lindsay told me about places to go around the Atherton Tablelands such as the wetlands and free museum in Mareeba and Penny mentioned the markets in Kuranda. All sounding like places I wanted to visit!
It was great banter and I was invited to Gregg and Vals' camper for breakfast the next morning!! 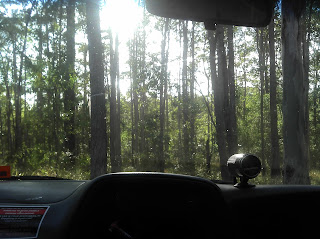 Can't remember the last time I woke up surrounded by trees other than we were staying at Centre Parcs when I was much younger!

So waved goodbye to my friend and his family, left Pomona and trundled my way along the Bruce Highway towards Rockhampton. 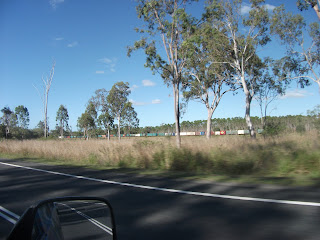 Seeing not much but a couple of trains... 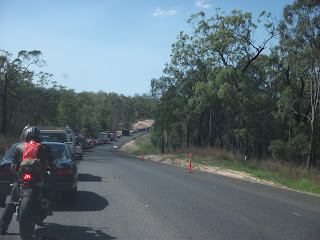 ...and plenty of roadworks!

Noticing that all along the dash there were warnings about driving too fast (stay under 80kmph) and not to let the engine temperature get too high (over half or over 105 Celsius). Also not to drive between dusk and dawn on the off chance that you hit a kangaroo!....not much to worry about then! 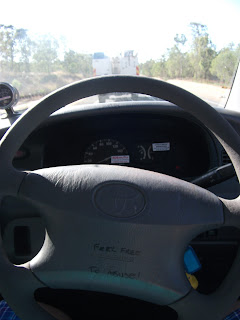 Ended up completely missing the turn off for the place I was going to spend the night so pulled into what I thought was a big lay-by type thing in a semi-residential area in Yeppoon. It was already dark and the warnings were still swirling around my head. I didn't want to kill Skippy afterall!

Day ONE of Walkabout

Orite! So on my way to collect the Wicked camper in Brisbane. Sitting on the bus, minding my own business in a world of my own. The bus pulls up at a stop like it has done many times before on this journey and two people get on. The first was a girl about the same age as me - nothing exciting there. The second was what I would imagine the typical Aussie bloke of a certain age to look like. Work boots, socks, combat shorts, t-shirt and hat (without the corks however). What came next I was not expecting...as he passed me to take a seat  further up the bus he smelt of sherbet!! Exactly like sherbet dibdabs!! 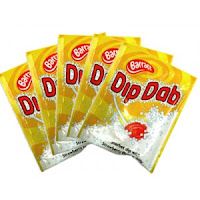 The van I was supposed to get wasn't ready apparently so lucky old me got....the poo car! Oh yes that's what it said and that's what I had to drive about in for 2 weeks! 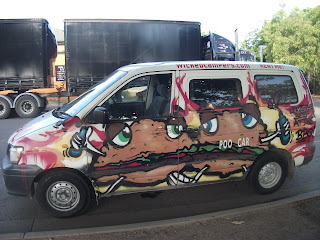 It wasn't all bad because it had a full tank of gas and a mix CD that the previous people had obviously forgotten in the CD player. 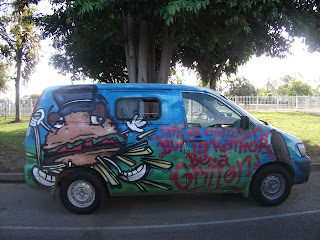 So I was off! Driving in a strange country on roads I'd never even heard of before in a van that had 'poo' written on it and...well....was absolutely filthy.
Thankfully, to ease myself into my adventure a friend said he'd come with me for the first day and show me the sights on the Sunshine Coast and we could rock up to his mums to stay the night.

We saw the Glasshouse Mountains and had a wee wander round the rainforest walk up there. We managed to see a few different birds and what we think was probably a pademelon! Also had a nosey round Noosa and I was let into 'the secret place' which is good for swimming! 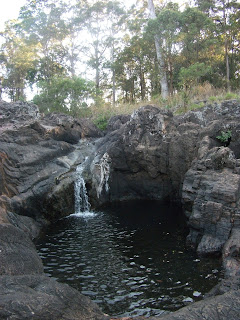 OK so somewhere in my crazy head I thought it would be a good idea to go Walkabout. There's some old problems I need to put to rest, and a whole new set of possibilities opening up for me that require some thought and musing over.
Yeah why not hire a camper and go exploring...by yourself...in an unknown country...where everything wants to eat or kill you. Best idea I've had in a while!! 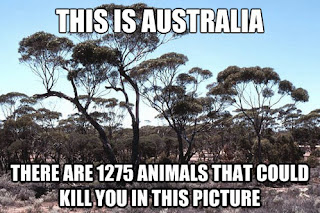 I collect the camper tomorrow morning and off I'll bumble into the unknown for two weeks!

I blame 3hungryboys for my idea! They were set the challenge by Hugh Fearnley-Whittingstall to travel from Axminster to Lands End in England, UK in a milk float without spending any money and just using renewable energy to power Daisy (the milk float). 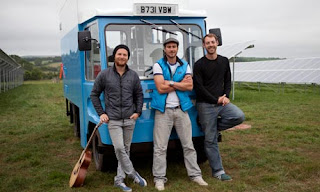 Now I'm not in a milk float and I do have a little money to spend but the seed of the idea can be traced right back to them!

Spent the day today trying to pack the least amount of stuff that has the maximum usefulness....I think I've failed but we''ll see over the next few weeks! Clothes, food, water, solar shower and a converter so I can charge my phone from the lighter in the camper (hope it has one!).

As it stands though I'll be pretty much reliant on my wits rather than technology and not really in contact with anyone except the obligatory "I've not been eaten yet" text that I've been told I must send everyday!

*I don't own any of these images, google image search gave them to me*
Posted by Unknown at 22:47 No comments: